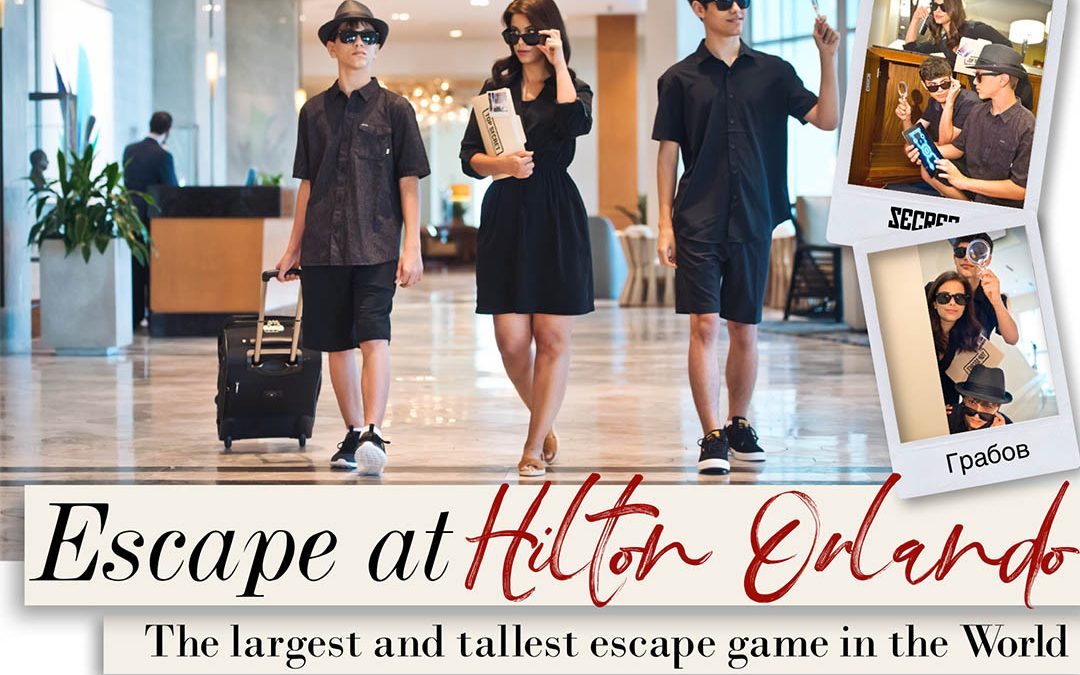 If you google “Escape Room near me“, you will notice an out-of-the-ordinary result. The world’s largest and tallest Escape Room just opened right here in Orlando, FL. inside the Hilton Orlando.

Different from others, the Escape at Hilton Orlando is not restricted to a room, but instead, it is played throughout the entire property.

The Hilton Orlando invited me to experience this NEW Orlando attraction first hand and here is what I learned.

Disclaimer: I have a bias about Hilton Orlando since my kids and I participated in the commercial and print campaign for the Escape at Hilton Orlando! It sounded really interesting when we were on set, so thank you to the Hilton for bringing us back to experience this.

How does the Escape at Hilton Orlando work?

The Escape at Hilton Orlando is an app base game that you use to look for clues throughout the hotel. Once you check-in you will receive a folder with initial instructions that will prompt you to download the app to start the game.

The app is user-friendly, once downloaded you will have access to your missions. The game has five chapters with four to five missions each.

The missions are challenging, but without spoiling the surprise, there isn’t a possibility to get stuck while playing the game. The only thing you need to remember is to keep track of your clues.

How long does the Escape at Hilton Orlando take?

One of the things I liked the best about the game is the fact that different from other Escape Rooms in Orlando, you can play the Escape at Hilton Orlando at your leisure. It is the best thing EVER! You can pause the game and continue the next day, this way it will not interfere with your vacation plans.

When you play some chapters, you will get rewards! I am not talking about virtual in-app rewards, but physical goodies like gelato for example.

One of the strong points about Escape at the Hilton is the fact that each chapter is played in a different area of the hotel. We visited the lobby, pool, and the hotel’s top floor.

Each set of clues for the chapter will be concentrated in the same general area, only after you finish the chapter you will move to a different area of the hotel.

We played the game over a two-day period, but our continuous playtime was about 5 hours.

Is the Escape at Hilton Orlando for kids?

Absolutely! While is it easier for older kids to play, young ones can also participate (and have fun) with some help. They might need guidance solving the clues, but who doesn’t?

This is a GREAT activity for everyone; friends, couples, and families. I loved the experience, but more than anything, I loved having an activity that I could enjoy with my teenagers, if you have kids this age you know exactly what I mean.

Can anyone book Escape at Hilton Orlando?

Only Hilton Orlando guests can book this experience. You can either book a package on the website that includes the game or you can add it on during your stay. It is worth it!

Benefits of staying at Hilton Orlando

The Hilton Orlando is an amazing property that for many years was considered a convention hotel, due to its proximity to the Orange County Convention Center, it is in fact one of the best-kept secrets in Orlando!

This property has one of the best resort pools in Orlando with a lazy river and a slice.

The Hilton Orlando is also a Universal Orlando partner, you will get free transportation to Universal’s theme parks and discounts as well!

You will find great dining options at the hotel, including the pool bar Tropics where you’ll find a delicious Mahi sandwich, Scratch a 24-hour grab-and-go dining location, and others.

If those options aren’t enough for you, the hotel is located right off International Drive, where you will find several great restaurants. I also love the fact that they have a Publix Supermarket and a Walgreens a mile away.

Do you need more reasons to consider the Hilton Orlando? I want you to know that once Epic Universe is open (the new Universal Orlando theme park currently under construction), the Hilton Orlando will be one of the closest hotels to the park, so keep this gem under your radar.

Are you a fan of Escape rooms? I love a good challenge and cannot wait for my next adventure.